It’s Not a Race

It’s Not a Race

One of Mrs. Jones’ favorite sayings is, “Comparison is the thief of joy.” If you look online, that quote often gets attributed to Theodore Roosevelt (though we doubt he meant it in the context of the Lifestyle). All the same, it applies aptly! 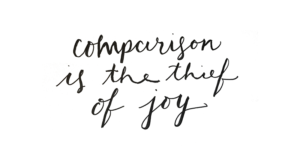 Here’s the thing: It is great to hear about, read about, and talk about others’ experiences in the Lifestyle to learn from them. After all,  it was our hope in starting the We Gotta Thing podcast and website that people would benefit from hearing our experiences, reflections, and ideas as we journey together through the Lifestyle. And the We Gotta Thing online community thrives in large part because people enjoy and grow from their discussions with like-minded couples.

At the same time, there’s a very real danger in allowing ourselves to move beyond sharing with each other toward measuring where we are in the Lifestyle against where others may be (or where we think they are). Believing we should have the same experiences or be in the same place in our journey as others can seriously impede our goal of enjoying the Lifestyle!

The thing to remember is that it’s not a race. At least, it shouldn’t be. Measuring ourselves against others is called “social comparison,” and it can be really, really problematic.

Don’t believe us? Ask science. A meta-analysis of research on social comparison theory that was published in Psychological Bulletin in February 2018 backs us up on this. The impact statement accompanying the meta-analysis says a lot:

“This article summarizes 60+ years of social comparison research and shows that people generally choose to compare with people who are superior to them in some way, even in the presence of threat to self-esteem, and that these comparisons tend to result in worsened mood and lower ability appraisal. Comparisons with proximal persons and on novel dimensions heighten these effects.”

In other words, we tend to compare ourselves to people we think are more advanced in some way(s) than we are. It could be that we think they are “better” at it or we may perceive them to be “ahead” of us in some way. And the object(s) of our comparison don’t even have to believe or act as if they are “superior” in any way, themselves. It’s in our own minds — if we think they are better, we tend to compare ourselves to them (and fall short, in our own estimation).

In the Lifestyle, this happens all the time. As couples enter their journey, they encounter folks who have been at it for a long, long time and have gained not only a lot of experience but also a lot of (hard won) wisdom. They also meet some newer couples who dove right in without hesitation and are extremely active, gaining experiences quickly. It’s easy to get caught up in comparing our own journey to others, and feeling as if we’re somehow deficient or “behind.”

“… even in the presence of threat to self-esteem…these comparisons tend to result in worsened mood and lower ability appraisal.”

Here’s the “thief of joy” part. What this is saying is that comparing ourselves to others in this way doesn’t make us feel very good about ourselves…and we are even more self-critical than we should be, as a result.

“We haven’t even played with anyone yet, but that other new couple has already played with three or four couples. We must be behind.”
“That couple has been to a house party, a Lifestyle event, and Desire. We haven’t even gotten the hang of creating a profile yet! What’s wrong with us?”
“Dang. We’ve been soft-swap for a year and that couple is already moving on to full-swap. Maybe something’s wrong with the way we’re approaching the Lifestyle.”

These are some of the ways we can beat ourselves up for not being on the same path as others or at the same places we perceive as “milestones.”

“Comparisons with proximal persons and on novel dimensions heighten these effects.”

This bit says that the negative effects we feel from social comparison are worse when the subject(s) of our comparing are people we are close to, and when we’re comparing ourselves in an area that’s new to us.

And, when we engage in social comparison while beginning in the Lifestyle — or just exploring it as a possibility — our feelings of inadequacy can be skewed even more. Comparison stems from our desire to gauge where we are with something new to us and to make sure we are doing it “right,” but it can result in some really negative emotions and bad experiences.

The upshot of all of this is not that we need to go it alone. We don’t need to quit reading blogs, listening to podcasts, or taking part in Lifestyle communities where we talk to others about our journeys in the Lifestyle.

What we need to do, as suggested in at least one article in Psychology Today, is make a conscious effort to swap out our social comparison habit for temporal comparison — comparing ourselves where we are right now to where we were in the past and where we want to be in the future.

The race analogy works well here: When we enter a half-marathon, we don’t expect to beat everyone else who’s running. It’s called a “race,” but everyone in it (except for the most elite runners) is actually participating with the goal of achieving a personal best — not beating the other runners. We can feel bummed if we don’t run as well as we did the last time we ran, or as well as we know we are capable of running — but we don’t get upset that other runners got to the finish line before us (though we may be a little bitter that they also get to the beer tent before us).

In order to combat the negative potential of social comparison, we try to compare ourselves only to the running goals — or Lifestyle goals — we’ve established for ourselves, and look at where we are now versus where we were at some point in the past. It doesn’t matter where anyone else is with their goals, because their “race” is not our “race.”

The takeaway? When we feel ourselves getting caught up in comparing ourselves with others, we should remind ourselves (and our partner) to measure our success in terms of our growth toward our own goals. The joy to be had in the Lifestyle is that we get to add to the fulfilling relationship we already have with our partner —  so, anywhere we are at a given moment in that quest is exactly the right place for us to be. No matter what anyone else is doing or what pace anyone else is pursuing.